So today at work, randy moss decided that since he is some kind of hotshot football player it would be okay for him to act like the king of the world. 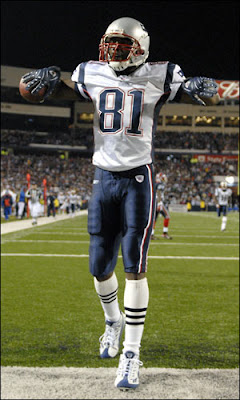 The Hertz girl calls me, saying "one of our VIP guests decided to just leave his car in the parking lot instead of returning it properly" i went ahead and agreed to go look for it since it was dead as fuck anyways and it would allow a smoke break (har har). i found it, keys in the ignition and everything, a shiny new Cadillac Escalade with 8000 miles on the odo.

I filled out the paper work for it and like the good samaritan that i am, i...

...didn't return it right away.

Instead i decided to park it next to the valet stand with the engine on, blasting the heater so we wouldn't freeze to death...

when i decided i had used up enough of the gas that he would be charged for, i took the taxi driver and airport shuttle driver on a little tour of the outer facilities at the hotel.

then i promptly returned it. 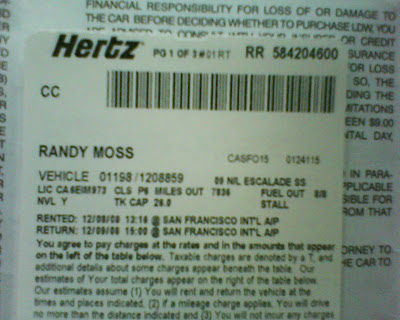 Hey Randy Moss, you're a douchbag. Oh and thanks for the Hot Tamales and Mentos dude!

ps. learn to use the parking gate, you press the big green button to get the ticket and that opens the gate "uhhhhh what green ticket?" you say? its the big green one right next to your face, bro.
Posted by Yuta Akaishi at 2:34 PM

Commenting on your blog is my favorite pastime.

don't trip! me and my old co-workers pissed randy off one time when we did a arriving flight for them. the raiders lost that night, and they were suppose to come out through the stairs on the side of the plane. one of us forgot the take the trash out that was left on the stairs. randy moss was first to get off, and booted the bag and started going off it was priceless. oh yeah, i notice most of the raiders like popeyes. yep.

just do it yuta..

lol great story. Although, I would have not eaten those Hot Tamales and Mentos... Who knows what he did with em